Google Scholar and Wikipedia as pre-search

Found out about this post via Twitter! Dean Giustini, the health librarian from UBC, Vancouver, posted in his blog The Search Principle :

"Use pre-search tools to orient yourself, to browse, ask questions and get acquainted with topics. Who are the leading authors in a given field? What articles are seminal? Pre-search as a concept is also applicable to Wikipedia. Think of mother Google this way (i.e. presearch) as well."

Dean is an expert on Google Scholar so I think this short post is worth a glance.
Posted by Peter Godwin at 04:07 2 comments:

How to embed almost anything in your Web site

This list by Emit Agarwal on the Digital Inspiration blog may save some a lot of time. Goes outside my usual postings but includes Web 2.0 tools like how to embed Flickr Photos and Slideshows, embed RSS Feeds in Web Pages, embed GIF Animations and Screencasts and many other really useful tips.
Posted by Peter Godwin at 03:57 No comments:

Digital Literacy in the Google generation

A short video which may be useful to demonstrate to FE or UG level that they need to do more than Google. It's when they want information that is complex, not purely factual, that they can hit trouble. Opening music sounds like Philip Glass ; then it gets a bit more raunchy. Refers to the CIBER Report on the Google generation.

Twitter : we all need to be in the loop

James Harkin ( author of Cyburbia: The Dangerous Idea That's Changing How We Live and Who We Are) writes an interesting article in today's Times.
He says :
"Twitter's coming of age, however, is generally dated to the Mumbai terror attacks at the end of November, when minute-by-minute updates of the unfolding chaos zipped around the world by eye-witnesses armed with Twitter on their laptops and mobile phones."
He's concerned that all this tweeting activity, after the initial boost in productivity and creativity, where we are learning to do many things at once, is affecting our brains and could slow us down in the longer run. Are we just tweeting because it is the thing to do?
There's also a little starter's guide to Twitter.
Posted by Peter Godwin at 05:05 No comments:

"This is a short film about information. Although most of us think we know what we mean when we say "information," we sometimes confuse the medium with the message."
Could be a useful trigger for discussion for UG level class.

New York Times article tells us how it is!

"In Web Age, Library Job Gets Update", is a great article in the New York Times, 15 Feb. 2009. The third in a series about The Future of Reading, it is about Stephanie Rosalia, a young school librarian at Public School 225 in Brighton Beach Brooklyn. Pity some of our nationals don't carry stories like this. The public might know a bit more about Information Literacy if they did.
Posted by Peter Godwin at 07:11 2 comments:

This post from Funky Librarian is great!
"The other day, however, when I was teaching library research skills in a lower-division Communications Class, something really wonderful and curious happened: students were talking, laughing, arguing, and questioning. "
A discussion on the merits of two articles (one magazine and one scholarly) led to discussions about MySpace and Facebook and genuine engagement about issues of security and authority. Recommended.
Posted by Peter Godwin at 07:04 No comments:

Fans of the Fast Show will remember Monkfish : well here's LeapFish, a search aggregator which gives you instant search results all on your search screen. The promo video on YouTube is called "LeapFish is the fastest search on the Planet".


Thanks to Judy O'Connell for drawing this to my attention.
Posted by Peter Godwin at 08:11 No comments:

A video by Superheroes from Weill Cornell Medical College Library.

From the Typewriter to the Bookstore : a Publishing Story : 3 minute Macmillan video which may be useful background in IL teaching.

Pew Report on Generations online in 2009

Interesting stuff from latest Pew survey in the USA :

Over half of the adult internet population is between 18 and 44 years old. But larger percentages of older generations are online now than in the past, and they are doing more activities online, according to surveys taken from 2006-2008.
Contrary to the image of Generation Y as the "Net Generation," internet users in their 20s do not dominate every aspect of online life. Generation X is the most likely group to bank, shop, and look for health information online. Boomers are just as likely as Generation Y to make travel reservations online. And even Silent Generation internet users are competitive when it comes to email (although teens might point out that this is proof that email is for old people).
Posted by Peter Godwin at 06:40 No comments:

That’s Infotainment!: How to Create Your Own Screencasts

THis is the title of an excellent article by Elyssa Kroski in School Librarian. Recommended to get you started and inspire you to use screencasts.
Posted by Peter Godwin at 00:50 No comments: 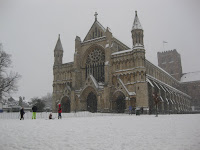 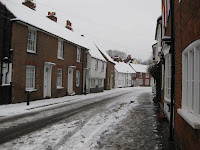 With the weather marooning us the last few days it is quite appropriate that I recommend two bunches of resources to help us get things done!
100 powerful tools to help your organise your thoughts and ideas, from Alisa Miller who says "
Now you can turn to these tools found on the Internet that will help you with tasks such as note-taking, bookmarking websites, highlighting important text during online research, creating mind maps, tracking time, keeping up with appointments, collaborating with others, managing projects, and much more."
A fantastic list.

Cameron Chapman at Mashable has compiled a great list at GTD Toolbox : 100+ Resources for Getting Things Done. All aiming to help you be more productive and save time : once you've mastered the applications...

Thanks must go to iLibrarian for drawing these to our attention.
Posted by Peter Godwin at 23:49 No comments:

Wikipedia Tutorial - a guide for students

Wikipedia Tutorial - a guide for students
Without the music this just wouldn't be the same : 3 mins 11 seconds of the William Tell Overture (the noisy bit at the end) underneath a slide show about the dangers of using Wikipedia produced by the Paul Robeson Library of Rutgers University. It concludes "If not Wikipedia, what should you use? ...ask your instructor or a librarian. There's a world of information beyond Wikipedia / Go forth and find it" May be a bit negative for some, but I think I shall give it a try so thank you Rutgers!

By the way
"What's the definition of an intellectual?"
"Someone who can listen to the William Tell Overture without thinking of the Lone Ranger!"
I fail every time!
Posted by Peter Godwin at 03:55 2 comments: