What is Information Literacy?

Mike Eisenberg answers some key questions in this excellent vodcast.He still sees IL at the centre of the literacies in the 21st century, with technology and digital literacies fitting in as part of the IL process. He refers extensively to his Big6 framework. It's a really useful vodcast for those wanting answers to the basic questions of what IL might be and how to start putting it into the curriculum.

"Is education mainly about information?" asks a little video made by the University of New Brunswick Library. In the clip Barack Obama makes a guest speech at a University (in an amazing blue robe).This might be useful trigger video for a discussion about education or what the library can offer.
Information + Time for Research, Reading, and Thinking = Success for Your Research Paper.

Posted by Peter Godwin at 08:09 No comments: 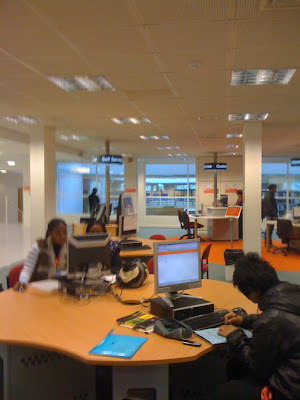 No doubt about it : I don't blog as much as I did ; there aren't so many posts on the blogs that I follow.
In an article 'Blogs wane as the young drift to sites like twitter" in the New York Times Feb 20, 2011 by Verne. G. Kopytoff, we discover the trends. The Internet and American Life Project at the Pew Research Center found that from 2006 to 2009, blogging among children ages 12 to 17 fell by half. Among 18-to-33-year-olds, the project said in a report last year, blogging dropped two percentage points in 2010 from two years earlier.
Among older internet users blogging is still preferred. Some will see Twitter and Facebook as complementary to blogs - a place to promote their blogs.
Posted by Peter Godwin at 03:37 No comments: