I know it is outside my normal remit but I cannot avoid posting about Spotify. I expect that many, or most of you, are already using it....but I have obly beeen using it on my PC and laptop about six months now. Imagine having much of the music of the world available for listening and bookmarking  into playlists free.Bear in mind there  are adverts occasionally (but there are on Classic FM and they are just as irritating there) and if you want to listen without ads you have to pay and if you want to listen to to your tracks on a mobile device you have to pay more but it is still a great service.

So what am I listening to while doing this post?  This is amazing music by a neglected master of JS Bach's time.


And I was able to embed this through the useful little article Add Spotify, Rdio and GitHub's Gist embeds to your site  by Alex Mills which I have just been reading.  Magic.
Posted by Peter Godwin at 08:13 2 comments:

Google+ and the Hangout feature

When Google+ came out I got quite excited and thought that I might use it instead of Facebook. In particular I thought the Hangout feature might be a really good way of communicating with students - even a group of them at once. Well, I have only a few friends on Google+ and have largely forgotten about it and them..... As for Hangout it's too late now as my students are mostly doing exams. I've missed the boat. Phil Bradley has done several posts here  and here  on Google+ Hangout so that has reminded me of my failure. I wonder if anyone out there has used it for Information Literacy in any way?
Posted by Peter Godwin at 07:29 1 comment:

I have said on numerous occasions how important the mobile dimension to our services  is set to become. Also I have long admired the LibGuides interface. This guide from University of Newcastle Library ticks both these boxes so it is a pleasure to feature it as an example of good practice!

It features the INTO Newcastle University app which gives everything new students need to know about living and studying in Newcastle.(A city which I enjoy and visit regularly to visit my son - not at University but working up there); Library search on a mobile ; encouragement to find the nearest available PC, contact tutors, check timetable on their mobile ; Facebook site ; links to other subject guides accessible by mobile ; links to basic apps ; explanation of wireless access ; explanation of  a mobile site ; explanation of  an app.
Posted by Peter Godwin at 04:01 2 comments:

Finding the right moment and many more YouTube tricks

This guide from Joyce Valenza is a mine of practical information for using YoiuTube better. I love YouTube but can remember more horror stories of its failure to work than I care to admit! (Lining up 5 clips in advance in a huge lectuire theatre at a conference and then having no sound...for instance!)
I need to read this in detail and use the tips. Suggest you do too!
Posted by Peter Godwin at 09:18 No comments:

This post from Jeff Dunn from Edudemic suggests 100 ways to use Twitter in education by degree of difficulty.
He says
"Twitter is a powerhouse for marketing, communication, business, and even education, letting people from around the world work together, share ideas, and gain exposure.
It has become a staple at many online colleges and campuses as well, leaving many academics wondering just how and if they should be using Twitter both in the classroom and in their professional lives. So we’ve revised our our original 2009 list to get you started or up to date.
Whether you’re an academic or just interested in building your Twitter profile, keep reading to learn some tips and tricks that can help you take the first steps towards using Twitter for coursework, research, building a professional network, and beyond."
Some great ideas here.

Smartphone users in the world as an infographic

We cannot doubt the importance of the mobile trend but much will depend on the penetration of smartphones. Here is the latest trend as an infographic.

Infographic by-
Posted by Peter Godwin at 08:33 No comments:

This looks an important book for those who want to get evidence of how social media is being used in higher education. Here is the contents page :

Remarkably you can get into the full text on Google Books here!


Thanks to Sheila Webber in her Information Literacy blog for alerting me to this!
Posted by Peter Godwin at 08:18 2 comments:

This presentation was given by Lori Cooney back in March 2012 at Mass Schools and Libraries and contains a wealth of suggested tools. If you are a school librarian and have missed this Prezi presentation then do take a look here.
Posted by Peter Godwin at 04:57 No comments: 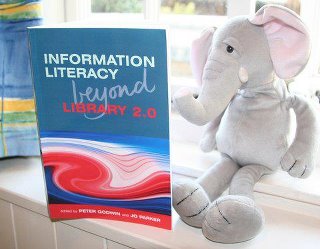 I have saved the best part til now! Jo Parker, Jane Secker and myself put on a fun Symposium " Information Literacy - just an outdated buzzword?" on the Thursday afternoon immediately after lunch.
I was worried that we were competing against 4 other events including a Teachmeet. Also immediately after lunch would anyone want to argue about the merits of Information Literacy?
We were very pleasantly surprised to see upwards of 50 delegates crowding into the room. But would they discuss the topics using the prompts we had devised? Also the room was in rows of immovable seats and we could not split them into groups.

No problem : the discussions when prompted were almost deafening!

We then each spoke for about 5 minutes :

Jo Parker gave a short summary of how librarians have changed their approach to user education, moving on to information literacy and the web, but was this enough?  Information literacy hadn't been very showy in the past, more like a female peacock rather than the full flowering male peacock. (slide).

I then took over and, disdaining Powerpoint, used 3 props. First the new edited book "Information Literacy beyond Library 2.0" which had been the starting point for the symposium (held up briefly and then thrown down on the floor...)but how to sum up some of the arguments?
Is there an elephant in the room now? Enter prop number 2 (Toy elephant) : there was an elephant in the room but it was not a single one. A better way to look at the problem of IL was to acknowledge that there was something very important around everyone's management of informatiuon : but it kept changing in its nature and no-one saw the whole elephant  : some saw the ears, some the tail, some the head.... There have been many attempts at a comprehensive term (multiliteracy, digital literacy etc etc) but perhaps the most useful way was to take a transliterate approach, which meant acknowledging overlap of literacies and that these would keep changing. Then when we came to talking to others about IL we would need to adapt our language and approach according to the discipline, level, and subject discourse and we would do well to put on a large pair of spectacles (put on a  ridiculously large pair of glasses). The existing IL frameworks had been too rigid but the new SCONUL framework promised more flexibility  and the New Curriculum for Information Literacy research by Jane Secker and Emma Coonan offered the kind of picture that that could fit the future.


Jane Secker then suggested that  information literacy should be viewed holistically as part of the learning process, and drawing on her work with Emma Coonan and the ANCIL ‘pizza’, Information Literacy should be customised and different ‘toppings’ might be more appropriate in different disciplines. However information literacy needed to be delivered embedded in the curriculum and at the point of need. She also saw information literacy as being part of helping students understand ‘the rules of the game’ and used the metaphor of chess, that by having the rules of the game explained it would not make them a grand chess master.
(For more about Jane's research see her other session at LILAC 2012.)

These little presentation created buzz so we set the participants to form informal groups off with the  first discussion point :

"If IL at your workplace was a ‘thing’ (like oup peacock or pizza) what would it be like for them?"

Then after a few minutes we asked :

"What do you do?Share your knowledge of the frameworks you use with your group (and if you don’t use any –why not?) "

Then after a few more minutes :

"How far do the existingframeworks/statements you’vediscussed go in terms of expressing what is happening at your workplace?Any pitfalls? Gaps?"

Another few minutes and then :

"What’s our action plan?What should we be doing differently (if anything?)"
We  encouraged participants to tweet to #!Lbuzz
This took the place of reporting back from groups. As the groups which were formed varied in size, and there were so many of them, the normal report back just would not have worked. In stead we were able to go through the twitter stream.
Here is a selection of the tweets :

IL is for life, not just assessment time

Info centric instruction should mean success lives on, and is not just about one off assignment success

Look thro the eyes of the learner to build ur IL framework. What’s in it 4 them?U can take a learner to the

IL fountain but can you make them drink?

Information Literacy as a bargain-basement – the TKMaxx of education

@touchthecloud Great use of crowdsourcing IL thoughts on Twitter – thanks for making it such fun!

Librarian as personal shopper – taking the punters to the good stuff and telling them what would look nice
on them.

The elephant has the glasses on – but can it see?

Can I be first to posit the idea of the Digital Literacy Spaghetti Bolognese framework? It’s basically just a mess…

Hearing a real need for librarians to have a database of shared resources. Pointing them to your survey @jsecker [think that’s the OER stuff]

Do you want a dutch one? @AnnekeDirkx Grappige sessie waarin we de resultaten van onze discussies moeten tweeten
She also said: and we think the frameworks are a little but old fashioned
We are using acrl or sconul frameworks
Our IL is a small and spotty ladybug, a dutch cow and a restaurant menu

Our action plan: create clearer smorgasbord of tasty options to communicate what I can teach

So what did we conclude?

Information Literacy will continue to evolve. It should not be looked at too prescriptively. It moves about and  is messy.
The term IL is still the best label we have, we will need to adapt our language and approach according to the discipline, level, and subject discourse.
Librarians can get excited about it even just after lunch and we have a bright future helping our everyone to construct their information universe.

Here are the slides.

Posted by Peter Godwin at 04:48 No comments: